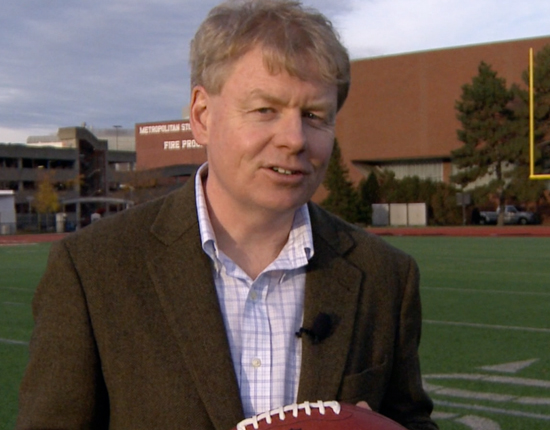 This lesson provides an introduction to Pressure, Temperature and Gay-Lussac's Gas Law, using as an example the Deflategate controversy that took place in the sport of American Football in January 2015. The main learning objectives are: (1) to define temperature and pressure; (2) to introduce the concepts of absolute pressure and absolute temperature, including the use of Kelvin measurement units; (3) to use Gay-Lussac's law to predict how the pressure of a fixed container of gas, such as a football, will change due to an increase or decrease in temperature; (4) to compare predictions from a physical law with experimental measurements of the same quantity; (5) to introduce the concept of measurement error and to discuss sources of uncertainty in pressure and temperature measurements; and (6) to use the Ideal Gas Law to compute the amount of gas that would need to be added or removed from a fixed volume of gas, held at constant temperature, to achieve a given increase or decrease in pressure. Two examples of classroom activities for the breaks include: measuring the pressure of a football or other sports ball that has been moved from the classroom to a colder and/or a warmer environment; computing the average of the measurements obtained for the Patriots'footballs at the 2015 NFL AFC Championship Game. This lesson has no pre-requisites and should take students about an hour to complete. (More time will be needed to duplicate cooling or heating of a football or other sports ball, e.g. by putting it in a cooler with ice or an oven with light heat.)

John J. Leonard is Samuel C. Collins Professor in the MIT Department of Mechanical Engineering. His research addresses the problems of navigation and mapping for autonomous mobile robots. He holds the degrees of B.S.E.E. in Electrical Engineering and Science from the University of Pennsylvania (1987) and D.Phil. in Engineering Science from the University of Oxford (1994). He is an IEEE Fellow (2014). Read more about John at: http://meche.mit.edu/people/faculty/JLEONARD@MIT.EDU

Investigative Report (PDF)
This is a link to the Wells Report, the 243-page investigative report published by the NFL regarding the deflation of footballs used in the AFC Championship game.

Chem Team: Gay-Lussac's Law
This resource, sponsored by Chem Team, provides an excellent overview of the Gay-Lussac Gas Law, including examples and a worksheet.