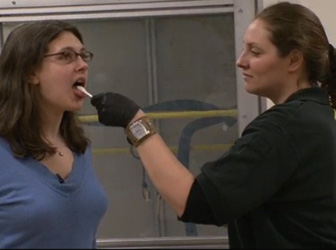 This lesson focuses on the molecular biology technique of DNA fingerprinting: what it is, how it works, and how the data from these experiments are used for paternity testing and forensics? DNA can be used to tell people apart because humans differ from each other based on either their DNA sequences or the lengths of repeated regions of DNA. Length differences are typically used in forensics and paternity testing. The technique of gel electrophoresis separates DNA by size, thus allowing people to be identified based on analyzing the lengths of their DNA. We discuss how gel electrophoresis works, and lab footage is shown of this technique being performed in real time. Students then analyze results from these experiments and work on case examples using DNA to match babies to parents and crime scene evidence to suspects. In terms of prerequisite knowledge, it would be ideal if students already have learned that DNA is the genetic material, and that DNA is made up of As, Ts, Gs, and Cs. It also would help if students already know that each human has two versions of every piece of DNA in their genome, one from mom and one from dad. Necessary supplies for this lesson include only paper and writing utensils, and the ability to print out or display the provided handouts. The lesson will take about one class period, with roughly 30 minutes of footage and 30 minutes of activities. At the end of the lesson, an optional video tour of the Cambridge Police Department’s Identification Lab is provided, giving students an opportunity to see the equipment used in crime labs to isolate both real fingerprints and DNA for DNA fingerprint analysis, from evidence found at crime scenes.

Megan Rokop is Director of the Educational Outreach Program at the Broad Institute of MIT & Harvard, a biomedical research institute located on the MIT campus. Megan earned her Ph.D. in biology at MIT, and has taught biology both to high school students in the Boston area, and to undergraduate students at MIT.

Learn.Genetics: Gel Electrophoresis
This presentation on DNA forensics is provided by “Learn.Genetics” of the Genetics Science Learning Center at the University of Utah.

Learn.Genetics
This is the Learn.Genetics main site, providing links to a wide range of resources for learning about genetics.